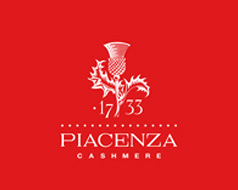 The manufacture of high quality fabric depends on the ability to choose the finest wool.
After the shearing of the sheep, Piacenza selects only the finest wool and the most suitable for weaving at their Pollone plant.
New fibres are comparable to the finer blends of wool, though, at present, nearly all of the production is in cashmere.

Piacenza also takes considerable pride in the fact that it has continued to use natural teasel in the manufacture of its fabrics.

Using such methods often takes up to ten times longer than using modern, mechanical methods but the results cannot be compared.
Similarly, the freshly woven fabrics are washed in spring water and with natural soaps, slowly and with the greatest care.
The fashioning phase also includes long periods during which the fabric can rest in conditions respecting precise criteria of humidity in order to preserve its original characteristics.
Guido Piacenza is the President of the Company.
At present, the company is managed by Enzo, Carlo and Vittorio Piacenza.

Together, they represent the eleventh generation of this remarkable family that has been dedicated to the crafting of wool of the highest quality for over 260 years. 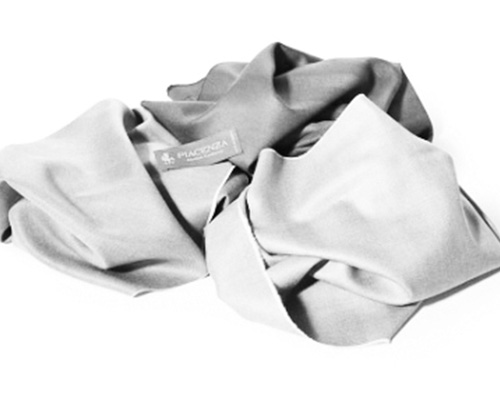 The family tradition of wool crafting goes back to 1600, but it was in 1733, more than a century later, that Pietro Francesco Piacenza created the first wool mill in Pollone, a small town nestled at the foot of the Alps, near Biella.
To encourage local industry and promote employment, the council of Pollone conceded the right to exploit the town's water to Pietro Francesco and his son.
The deed of concession has been preserved and is dated 1750.
It is said that this water "possesses the finest qualities for the working of wool".

The family firm, already flourishing, was passed on to Carlo Antonio Piacenza. He gave it a new impetus and, in 1819, opened two new establishments. Several years later, his son, Giovanni, was the first to introduce into Italy a new technique of fashioning wool decorated with various motifs.

Development on the International Market
Little by little, the Piacenza family moved beyond the confines of Italy’s borders, and began to develop its contacts around the world. The family managers also took an interest in technical progress, such as the invention of the French engineer, Pierre-Simon Girard, who had just installed in the Biella area the first hydroelectric power plant, based on a new type of turbine that he had invented.

Felice Piacenza played an important role in life of the region. As early as 1900, he founded the Biella Industrial Union, the purpose of which was to regulate relations between the firm and labour. He became the Union’s first President.

In 1911, he built an ultramodern factory in Turin. The following year, he founded the "Lanificio Scuola Felice Piacenza", an institution specialised in training personnel and recognised of being in the common public interest. The management of the firm was passed on to his youngest son, Enzo Piacenza.

After the end of the Great Depression of 1929, he created fabrics for the high fashion industry that he presented to major fashion designers in Paris and New York. His creative talent was immediately recognised and he was appreciated for his sense of colour and of beauty, as well as for the quality of his style.

He was also a pioneer: during the Second World War, he invented new types of textiles to replace wool fabrics that had become extremely difficult to find. He presented these fabrics, elaborated on the basis of different types of animal hair, to King Victor Emmmanuel.

Production of the Highest Quality :

The house of Piacenza rapidly earned its place among the leading Italian exporters: 70 per cent of its production is sold abroad.
With new production techniques and growing demand, more space was soon necessary and a new plant was built, bringing together the most modern state-of-the-art technology and the expertise of traditional know-how.
These facilities gave the company the chance to develop production of the highest quality.
"Fratelli Piacenza" buys all its raw materials directly from the country of origin: its Alpaca comes from Peru, the prized Cashmere is from Outer Mongolia and the soft Merino comes straight from huge Australian sheep farms.