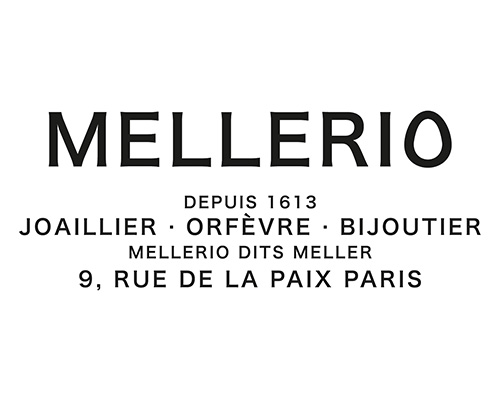 Since 1613, through its heritage, its know-how and its prestigious clientele, the Mellerio house has embodied the history of French fine jewelry.
At the rendezvous of all the great moments of life, Mellerio has always known how to renew itself and develop unique and exceptional jewelry pieces.

On October 10, 1613, Queen Marie de Médicis granted exceptional privileges to members of the Mellerio family, who had arrived from Italy a century earlier. thanks to this decree, renewed by all the kings of France until Louis XVI, these peddlers of small precious objects will very quickly become the jewelers of an illustrious clientele.

Since that date, the fate of France has interfered permanently with that of the Mellerios, whose “little” history often intersects with the “big” one. All the queens of Europe (Empress Joséphine, Queen Marie-Amélie, the Queens of Italy, Spain, the Netherlands, Empress Eugenie etc.) will purchase many jewels from Mellerio, as well as that famous writers, composers, bankers, industrialists ...

14 generations later, after the wars, the regime changes, the trips beyond the borders, the many distinctions,
innovation patents and exceptional creations, the Mellerios are still today at the helm of the last French high jewelry house, still family-owned and independent. Its tailor-made creation service gives MELLERIO a unique status at Place Vendôme, because special orders constitute the heart of its activity.

MELLERIO has also kept and extended its know-how in goldsmithing since it achieves some of the finest sporting awards each year, among which the Coupe des Mousquetaires (French Open Tennis - Roland Garros) and the Ballon d'Or ( Trophy for the best footballer of the year).

The Maison is currently managed by Laure-Isabelle Mellerio, who is also artistic director. Its ambition is to preserve its authentic, contemporary and creative image while ensuring its international development. 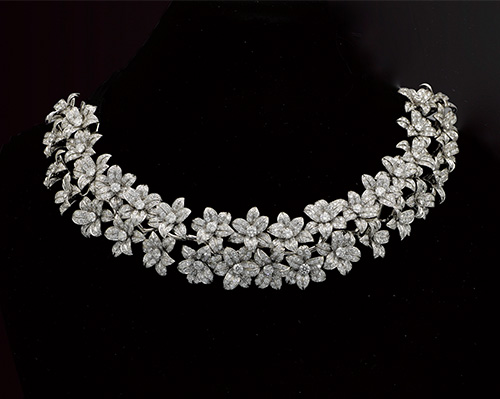 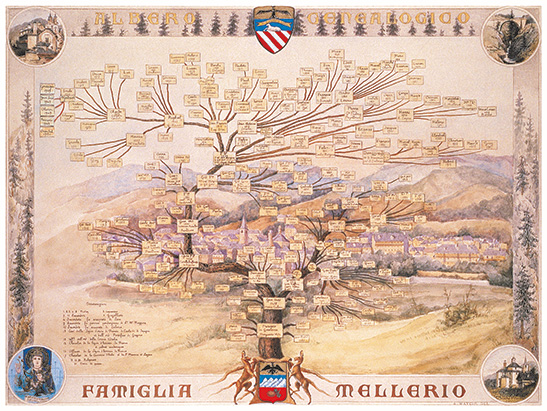 Coming from Craveggia, a small village in Val Vivezzo nestled on the border between Piedmont and Lombardy, the Mellerios arrived in France after the Italian Wars. They work there as chimney sweepers, hawkers, seasonal merchants, while maintaining close and constant links with their country of origin.

The Regent Marie de Medici decides to grant her protection to the Mellerio and to the other inhabitants of three Lombard villages "for services rendered to the Kingdom of France" and grants them exceptional privileges. Legend has it that this incredible privilege was given after a family member discovered a plot to instigate the assassination of young King Louis XIII. Thanks to this decree, these peddlers of small objects will very quickly become the jewelers of an illustrious clientele.

Opening of a boutique  rue de la Paix. The Mellerios are the first jewelers to settle in this street, recently created by Napoleon I.

Mellerio is appointed official supplier to the royal family following the proclamation of Louis Philippe I, king of the French. The House produces transformable jewelry inspired by nature. Throughout the 19th century, other royal and imperial courts followed suit (Spain, Italy, Netherlands, Brazil, etc.) 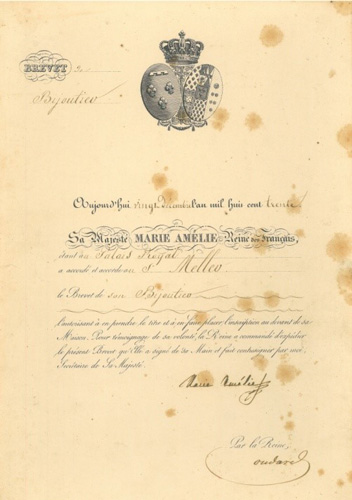 Paris Universal Exhibition: Mellerio receives the Gold Medal for his achievements. Presentation of a flexible peacock feather and the rococo tiara which will be purchased by Queen Isabel II of Spain. This one is made with elements of platinum, one of the first times in the history of jewelry. Mellerio is appointed official jeweler to the King of Italy, who purchases the wild pink tiara and laurel branches for his son's marriage to Marguerite of Savoy. 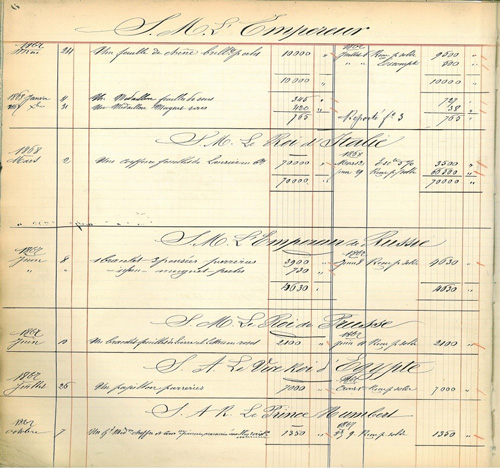 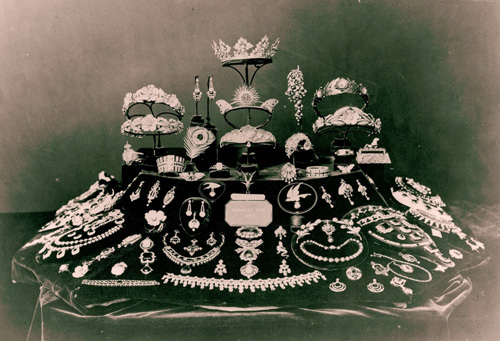 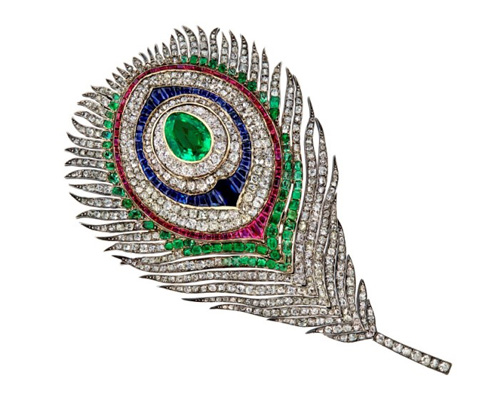 At the very beginning of the 20th century, Maison Mellerio produced a spectacular series of Art Nouveau jewelry on the theme of the peacock, already present in the archives since the Second Empire. Always in search of the most striking realism, Mellerio chooses the guilloche enamel technique to perfectly reproduce the splendid shimmering of peacock feathers, which thus turn into necklaces or brooches. It was acquired in 1905 by the Maharajah of Kapurthala, probably with the intention of wearing it at the wedding of the Spanish king Alfonso XIII which takes place a few months later. 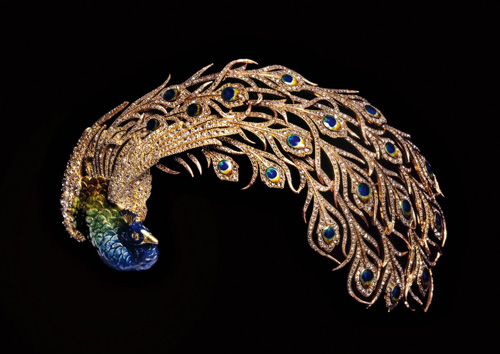 At the request of the French Tennis Federation, Mellerio designed the Coupe des Mousquetaires as well as the other trophies awarded to the winners of the Roland Garros tournament.

Launch of the first watch collection with the patented "Neuf" watch. The unique ovoid shape of its dial enabled it to obtain the Cadran d´0r in 1998.

Creation of a new diamond cut, the "Mellerio Cut" whose patent has been filed for diamonds and colored stones.

400th anniversary of the Maison. Launch of a Haute-Joaillerie collection inspired by the lily, in particular a unique piece, the "Medici" collar requiring 4,500 hours of work.

The last French high jewelry house still family-owned and independent, the oldest jewelry house in the world. Currently directed by Laure-Isabelle Mellerio, who also assures the artistic direction and reinterprets in each of his creations the style of Mellerio imbued with his personal touch: creating a play of contrasts of colors, materials and sizes of precious stones. 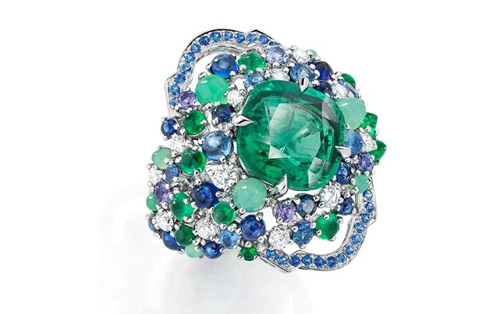